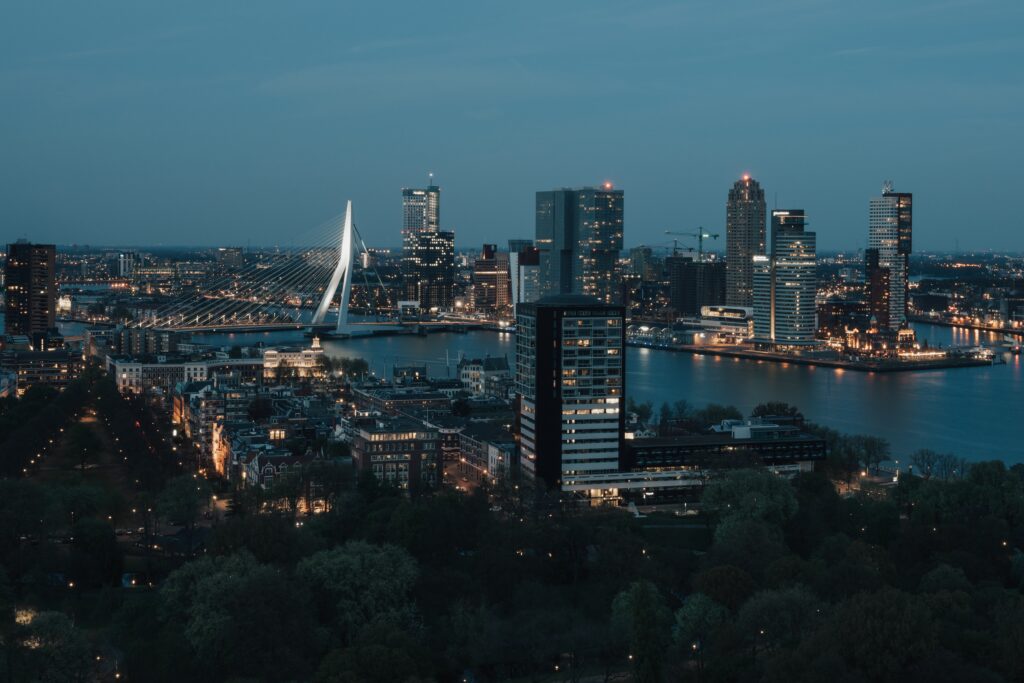 Many international students come to study in Rotterdam every year. Whether Erasmus University Rotterdam, Rotterdam University of Applied Sciences, Codarts or Willem de Kooning Academy, you can look forward to living in a location that is not quite like all other Dutch cities. The best way to get to know your new surroundings is definitely by making use of Rotterdam’s diverse offering of transportation. I've outlined all of Rotterdam's best public transport options out there.

Following suit after Amsterdam, Rotterdam is the Netherlands’ second city, with a population of approximately 623,000 people. Not that big, right? That’s the great thing about Rotterdam: With its skyline and busy streets, it feels and looks like a big city; yet, it’s actually quite overseeable in size, and your chances of getting lost are slim.

Since its bombing in World War II, Rotterdam’s image has been largely reconceptualized as an international and culturally vibrant port city. Today, it is home to over 175 nationalities, guaranteeing that, regardless of where you’re from, you’ll have no issue fitting right in. Be it cultural activities, diverse nightlife opportunities or great food (including the beloved kapsalon), Rotterdam has something for everyone.

Getting around the city

Rotterdam’s population isn’t the only thing that is diverse; instead, this variety is mirrored in the city’s public transportation availabilities as well. Whether you’ll be on your way to class, work or simply on a night out with your friends, there are many routes that you can take. We’ll walk you through the main options so that you can try them all out and see which one appeals to you most.

To make use of the majority of public transportation options in Rotterdam, you’ll need a ticket or so-called OV-Chipkaart. While there are several options available to you, ranging from an anonymous non-person-bound to a personalized one, we recommend you make use of our international student-tailored option: The Tripkey Mobility Card.

Not only is it convenient to use, as you won’t have to keep reloading money onto it as you have to do with other OVs, but you’ll also be automatically given a discount on train travel, 15% off off-peak hours and weekends.

For all the information and instructions on how to proceed, check here.

Let’s start with the obvious one: biking! Ask anyone and I guarantee that they will tell you that you can’t truly start your life in the Netherlands if you don’t own a bicycle. So, in the off chance that you haven’t gotten one yet, what are you waiting for?

Maybe you’re one of those people who haven’t really biked properly for a while. Maybe you’re feeling just the tiniest bit intimidated. Believe me, I think all international students have felt this. After all, most of us come from countries where it’s simply not possible to bike everywhere. The great thing about Rotterdam is that cycling is incredibly accessible to the point where anyone who knows how to 'not fall off' will have no problem.

Unlike other Dutch cities and towns, in Rotterdam, you’ll rarely have to share the road path with everyone including pedestrians, cars, scooters, other cyclists and maybe even the occasional e-scooter. Due to the city’s reconstructed infrastructure, clearly marked and often double-laned bike paths span its whole perimeter, allowing you to discover the entirety of Rotterdam’s charm, whether you want to grab a coffee at a cute café in the West or go shopping in the North.

Well, maybe biking isn’t your thing. Or it’s only your thing when the weather is nice. If cycling through rain clouds sounds like something you won’t be able to do non-stop from November to March, then consider take advantage of RET, Rotterdam’s public transport company.

Founded in 1878, RET is responsible for next to all buses, trams and metros throughout Rotterdam’s metropolitan area. The available lines, including 58 for buses, 9 for trams and 5 for metros, ensure that the whole area of Rotterdam is covered by at least one of these three modes of travel. It’s also rare that you’ll ever have to wait very long to catch a tram, bus or metro, unless of course it’s Sunday, the evening or snowing (the whole country shuts down as soon as three flakes fall from the sky).

Pro tip: If you ever need to go to The Hague, try taking the metro for your fair share of small-town farm views.

For a more in-depth description of each of these, check out our other blog posts, public transportation in the Netherlands, here.

For inter-city travel between Rotterdam and other Dutch cities, trains are obviously your best bet. Grabbing one of the yellow and blue NS trains is pretty straightforward: Check the NS app or website in advance to see which train you need to take and how frequently it departs. Within Rotterdam, there are three train stations, namely Rotterdam Centraal (known for its very impressive architecture), Rotterdam Blaak (right next to the famous market hall) and the further away Rotterdam Alexander.

As you may have realized since coming to the Netherlands, scooters are very common here. Maybe you’ve already been narrowly passed (more like almost been crashed into) by one of these on the bike path. Whether or not you’d ever consider getting a scooter for all your transportation needs, Rotterdam allows you to give it a try on any given day you choose.

Whether the green Felyx or white and purple Check scooter, both companies work the same way: You upload your driver’s license and use an app to unlock any vehicle on the street. Once that’s done, you’re ready to cruise off, leaving all the slow bikers behind you. Give it a try at least once, because it’s very fun!

Rotterdam’s port identity is hard to miss; yet, few students ever really experience the city’s views from the water. Don’t be like the others and go for a ride on one of Rotterdam’s three boat options: the water taxi, the waterbus or the RET fast ferry.

While the water taxi service (look out for the small yellow wooden boats) operates between Hotel New York, the Veerhaven and the Leuvehaven, the waterbus is for the commuters who need to travel between Rotterdam and Dordrecht and who want to avoid the traffic. Finally, the RET fast ferry sails to the port extension Maasvlakte and is the best way to experience Rotterdam’s port. If you’re lucky, you’ll even be able to spot some seals along the way.

That’s it, our guide to public transportation in Rotterdam. Look out for the next blog post in this series, namely Public Transport Guide: Amsterdam.