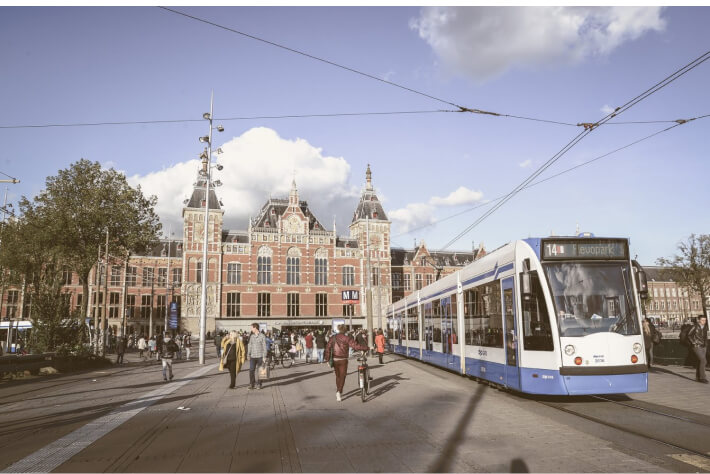 In our other blog post of this series, we gave you a quick crash course on how to navigate the city of Rotterdam by public transport. Now, we move on to Amsterdam, the Netherlands’ capital and city that boasts the most inhabitants. If you’re anything like me, I’m sure you’ve had a fascination with Amsterdam for a while. But, how exactly do you get around the city? Here's our public transport guide of Amsterdam.

Since you’re reading this post, chances are you either just moved to the city to study or you’re thinking about whether you should once you finish your current education. Be it the University of Amsterdam, Vrije Universiteit Amsterdam, Amsterdam University of Applied Sciences, The Amsterdam Fashion Academy or Amsterdam School of the Arts, there is an abundance of higher education options all over the city. Whichever institution you’ll be attending, it’s useful to get to know Amsterdam through its transport options.

Today, Amsterdam has gained the reputation of open-mindedness and acceptance toward a variety of lifestyles. In short, anyone can be whoever they want to be, and few will care. Its history dates back to the 13th century when it was founded as a fishing village. Due to a trade culture of products like beer, wheat, guns, tobacco and diamonds, Amsterdam would soon go on to become the richest city in the world around the 17th century.

This was also the period known as the “Dutch Golden Age”, which saw artists like Rembrandt leading a flourishing cultural movement. After the 1940 Nazi invasion of the Netherlands, and in the wake of the end of the second world war, Amsterdam transformed into a liberal service-based city.

Getting around the city

Amsterdam is a city like no other, with a rich history and thriving cultural scenes. Just like most Dutch cities, owning a car is far more of a nuisance than an advantage, and all you’ll need to get around the city is an OV-Chipkaart and/or a bike.

You’ve probably heard of the public transport cards already, and maybe you’ve already invested in one yourself. Then you’ll know that your OV is your ticket to next to all public transport vehicles scattered throughout Amsterdam. In case you have yet to get one, we recommend you make use of our student-tailored travel option: The Tripkey Mobility Card. Not only is it convenient to use, as you won’t have to keep reloading money onto it as you have to do with other OVs, but you’ll also be automatically given a discount on train travel, 15% off off-peak hours and weekends.

For all the information and instructions on how to proceed, check here. We also have a more extensive explanation of OV-Chipkaarts in one of our past blog posts.

Okay, yes. Biking in Amsterdam looks a tad intimidating, especially to international students who likely haven’t ever found themselves biking all the time before. Maybe you’ve even been yelled at by an Amsterdam local for accidentally stepping onto the bike path in front of them. This is arguably the main pet peeve of many Dutch cyclists who, every year, have to deal with a new batch of tourists and students who don’t yet understand the difference between the sidewalk and the bike path. No worries though, it happens to everyone. And believe me, once you jump onto the bike yourself, you’ll quickly feel just as much annoyance if a clueless somebody forces you to come to a last-minute crashing halt.

The fact is that you should try not to think about it too hard. Get yourself a bike and just get going. You’ll get the hang of it quickly and, before you know it, cycling will become your new favorite way of discovering the city. Not only will you not be bound to the schedules of public transport, and can go wherever whenever you want, but it’s also a great form of exercise. The only thing to keep in mind is that you should be investing more money into your bike locks than your actual bike to minimize the chance of it being stolen. Believe me, there are few feelings as annoying as coming out of the supermarket with two bulging bags of groceries to find your beautiful bike isn’t where you left it anymore.

However, as long as you protect your new bicycle to the best of your abilities, it’ll be your trusty travel companion in discovering all that Amsterdam has to offer.

Even if you think biking will be your mode of transport on most occasions, there will be days when you’ll have to take a tram, bus, metro or ferry to reach a certain part of the city. Whereas in Rotterdam, the RET is the company behind public transport, Amsterdam’s equivalent is the GVB.

Using trams, buses and metros is pretty self-explanatory: You check in and out using your OV-Chipkaart and money will automatically be deducted from your card, depending on how far you’re traveling. While trams are great for getting around the city center, metros are useful if you need to reach a district farther away, such as the Bijlmer stadium. Meanwhile, buses usually cover both the core of the city as well as outside neighborhoods.

The fun part is that you can even take a ferry to cross the IJ river, for example, if you’re looking to reach the central station from Buiksloterweg, where popular attractions such as the Eye Filmmuseum are located. You can even take your bike with you!

While Amsterdam basically offers everything you could ever need, it could very well be that you’ll have to take a train once in a while, whether to reach the airport or if you’re going on a day trip to another Dutch city. While most of these cities only have two or three train stations, Amsterdam has many, with Amsterdam Centraal also serving connections to Belgium, France, Germany and the UK. Other stations include:

We have more extensive information on NS trains here.

In 2020, Amsterdam’s township allowed the usage of up to 700 shared scooters. This has become a great option for when a bike just isn’t fast enough, or if two bike-less people need to get somewhere together (because, let’s be real, taking someone on the back of your bike is not always a fun experience). Depending on whether forest green and white or purple and white is your preferred color combination, you can opt to take either a ‘felyx’ or ‘check’ scooter. Just upload your driver’s license onto either app and check what scooter is the closest to you.

And that’s our full public transport guide for Amsterdam. You won’t know your favorite way to navigate the city unless you try them all out. Keep your eyes open for our next blog post in the series, namely Public Transport Guide: Den Haag.