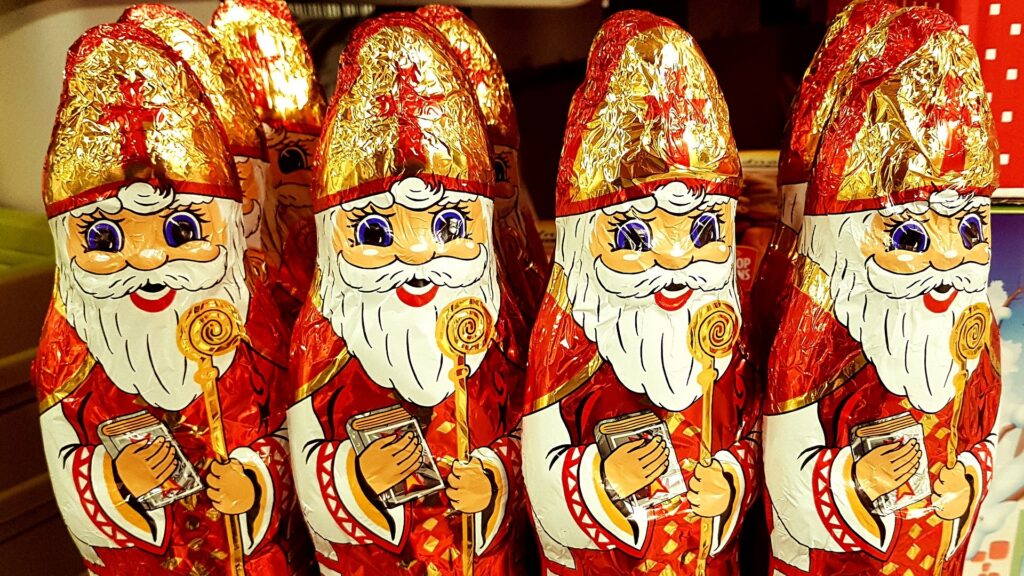 The Arrival Of Sinterklaas: A Guide For Non-Dutchies

As soon as there’s even a whiff of fall in the Dutch air, the supermarket aisles are stocked with what feels like 243 different flavors of kruidnoten. Ok, granted, that’s an exaggeration. But there really are a lot of different types - from chocolate truffle to red velvet. The yummy small spice cookies signal to all that it’s that time of year again: the Dutch “Santa” must be right around the corner. Here is your guide on the arrival of Sinterklaas.

Time for a quick history lesson. Buckle up, because this is a weird one. Sinterklaas is based on Saint Nicholas, a bishop from the 4th century who lived in Myra, modern-day Turkey. He was known as the patron saint of children because he gave up his wealth and helped out wherever he could. His most notable deed was probably when he stumbled into a restaurant and found its innkeeper making a stew out of three little boys after they could not pay for dinner. Of course, St. Nick wasn’t too happy about this. He quickly pieced the boys back together and became their surrogate father. Whew, what a guy.

He also gave three little girls enough money so that they could quickly attract a husband with their fortune. That’s where the tradition of gift-giving on Sinterklaas day originates from.

Differences between Sinterklaas and Santa Claus

It might be tempting to think of Sinterklaas as the Dutch Santa Claus, as I did above. However, you may not make friends if you go around saying that too loudly. Sint may look like Santa’s long lost brother, but there actually are some differences.

During the year, Santa Claus dwells in the cold in the North Pole, while Sinterklaas is clearly a sun guy, choosing to live in Spain. He also has a white horse called Ozosnel that gets him from A to B, giving him no need to borrow Santa’s sleigh and reindeer. Instead of giving presents on December 24th, Sint arrives mid-November, surprising kids with small presents and sweets in their shoes here and there. December 6th is the main event, and he celebrates his birthday by bringing the big, exciting gifts. Of course, he can’t do all that heavy work by himself, so he recruits several helpers called Pieten.

Sinterklaas’ boat from Spain arrives in a different Dutch city every year. This year, a town close to Rotterdam called Hellevoetsluis was lucky enough to welcome him first. Sinterklaas, complete with horse Ozosnel and Pieten, stepped onto Dutch soil on November 12 and arrived in Amsterdam the day after. That officially signalled the beginning of the holiday season.

Small Sinterklaas celebrations take place leading up to the big event on December 6th. Amsterdam, for example, organized two parades, where people could see Sinterklaas on both his boat and on his horse. Throughout November, he makes his way to different Dutch cities, greeting everyone gathered on the street to welcome him. While the sweets Sinterklaas tosses into the parade crowds are usually meant for kids, I’m sure nobody will judge you if grab a grab a piece or two.

In fact, even if you don’t try very hard, you’ll probably still find yourself stumbling across a Sinterklaas celebration in your Dutch city at some point. Then, you’ll be able to tell your family and friends that you took part in a truly Dutch event.

I already mentioned kruidnoten, the little, round spice cookies which are the main star of the Sinterklaas show. However, that’s not all. There are also pepernoten, a lighter non-uniformly shaped spice biscuit. Apparently some Dutchies will get riled up if you mistake one for the other.

You may have also seen the chocolate letters popping up in your local supermarket. That’s another Sinterklaas tradition: children will get a tasty, chocolatey version of their first initial during the holiday season. It may have even been brought by Sinterklaas personally, who is known to sneak through chimneys and fill kids’ shoes while they’re asleep.

You may not fully get Sinterklaas if you’re not Dutch. After all, each country has its own traditions and customs. However, even if you’d rather stay at home than catch a first-hand glance of Sinterklaas, take this opportunity to indulge in all of these traditional Dutch sweets. And buy your international friends chocolate letters. They’ll thank you.

Finally, you may be wondering: If there’s already Sinterklaas, do the Netherlands celebrate Christmas? Yes, yes they do. It’s less of a big deal, but Dutch children are clearly the luckiest ones, as they get one and a half months of pure holiday joy. Now that you’re living in the Netherlands, however, nobody is stopping you from doing the same. Happy celebrations!

This was your guide on the arrival of Sinterklaas on November 12th. Look out, as we’ll be publishing another blog in the coming weeks that describes the actual Sinterklaas celebration that takes place on December 6th.

In case you’re unsure of what to do in the Netherlands in November aside from Sinterklaas, check out our previous blog here.

Student life
The Arrival Of Sinterklaas: A Guide For Non-Dutchies